This morning I awoke at 7am to a still-dark sky holding a perfect half moon. I had been awakened by gently insistent church bells from the village of Gissey sur Ouche, 200 km west of the French border with Switzerland, where the boat that I am aboard with my family had tied up for the night. The canal that we are traveling, the Canal de Bourgogne, was constructed some 200 years ago to connect the river Yonne at Laroche-Migennes with the river Saône 242km away at Saint Jean-de-Losne. Once an important commercial artery, the fact that this distance can now be accomplished by car in a day has rendered the canal the province of pleasure-seekers and those otherwise committed to inefficiency in their travel, which I certainly am. 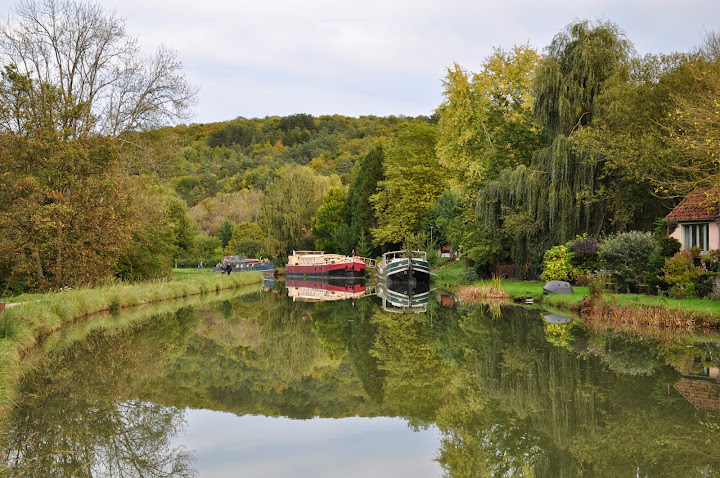 My sister recently pointed out to me that it has been a year since my last post here, which is as good an excuse as any to begin writing again. During the years that I lived in China, so full of travel, love, and outward explorations of the world, I would often think, “Now this is what it means to be living.” In the year that has passed since my last post, I have had times of great happiness, but they have occurred in the context of being truly lost, overworked, sleepless, and even despairing. As I stood on the deck this morning — the cold air heavy with fog an undeniable sign that autumn is here, an unmistakable reminder of the winter that is coming — I felt a tiny dread, an echo of last year’s endless winter that broke my heart and presided over the utter disintegration of my personal life. This too, is what it means to be alive, a part of the “life’s rich pageant” to which my father increasingly refers.

One month ago I passed my comprehensive exams and national boards, which means that I have graduated and am now a Certified Nurse-Midwife, just under five years after I first realized that I was not going to work in public health forever and began hatching a plan for change. In the past year, I have provided prenatal and gynecologic care to hundreds of women, attended to the health of their newborns, lost track of the number of births I witnessed, welcomed several dozen babies into my hands. I learned how to diagnose and treat infection, how to repair lacerated skin and muscle, how to prevent death by hemorrhage, how to dislodge a baby stuck behind the pelvis, how to revive a baby who comes into the world and does not breathe. I began to learn how to tell a woman that the pregnancy she thought was healthy is now over, how to tell her that her diagnosis of infection means her husband has been unfaithful, how to tell her that she may have cancer. There was rarely a day in which I didn’t make a mistake; thankfully these usually didn’t cause irreparable damage.

I am awaiting the arrival of my license to practice midwifery in New York, regrouping mentally and physically, and looking for work.

In the course of finishing my midwifery training, I was required to do some writing by my program director, lest the entire period pass without deliberate self-reflection. I now have time to look back over this writing and I am struck by how much sadness and fear it evinces, instead of the joy you might expect from someone finally learning the craft that she had admired for so long. Perhaps this is a product of the innate seriousness of the work of caring for women and babies. Perhaps it is a product of the shadow that came over my life when I learned how to care for strangers but forgot how to care for those closest to me. It certainly reflects my ongoing criticism of the damaging institutionalization of maternity care, which does everything in its power to remove power and agency from women and transfer it to the institution itself. I hope that it doesn’t reflect taking for granted the happy outcomes — a healthy woman, a healthy baby — because I have learned how far from certain these outcomes are.

So I will begin posting some of that writing here, and maybe you’ll tell me what you see in it. Next time I’ll start, at least, on a high note: the final birth I attended as a student.