Tomorrow begins a new chapter of my life: the first day of class in my nurse-midwifery program. For three years I housed my thoughts on trusty ole BirdAbroad, but this is a transition large enough to warrant a blog makeover. Welcome to This Woman’s Work, where I’ll be blogging about life as a student nurse-midwife, women’s health, healthcare in America, New York City, Jewish life in Brooklyn – and whatever else is on my mind.

I decided to become a nurse-midwife over two years ago, when RP and I still lived in China, and getting to this point has involved endless little steps: postbac prerequisites, training as a birth doula, harassing every midwife from New York to Beijing for their advice and guidance, applications, interviews, and decision-making. Having settled on a combined BS/MS program in New York City, RP and I have moved back here and settled into an apartment on a leafy street in Brooklyn; the thousand tiny tasks a new home demands have distracted me for a solid month from the fact that tomorrow is actually going to happen. It’s time to hang up my frame pack (at least temporarily), go back to school, and finally make this dream real.

What’s with the new blog title, you ask? There’s the Kate Bush reference, of course. For the uninitiated:

But the larger significance of this title is related to how my thought process has evolved about “women’s work.” As a feminist, I have been loathe to be too involved in this category of work – that is, the customary activities and skills not necessarily chosen by individual women, but foisted upon us as a group through tradition and sometimes with force. Care-taking, for example. Home-making. Mothering. Handiwork.

It’s not that I take issue with these activities themselves, but rather that I have a fear of leading a life unexamined, of embracing tradition without challenging it first. (God forbid anyone should think that I baked that bread because it’s my duty as a woman to have such skills, or that I wore a skirt because I think it’s my main job in life to look pretty!…etc.) The truth is that my fear of “women’s work” actually kept me from admitting that the issues I wanted to make my life’s work, the topics that most interested me intellectually, were “women’s issues”: reproductive and sexual health, pregnancy, birth, abortion. I wasted a lot of time trying to divert my mental energies into areas deemed more muscular, more formidable, more estimable.

So please don’t give me a quizzical look and ask whether or not I’ve considered medical school – I’ll get into that later. Please don’t ask if I’m becoming a midwife because I really want to get pregnant and have lots of babies. Please don’t lower your voice and say, “You’re not going to have to, ya know, clean up shit, are you?” (For the record: yes. That’s part of my training as a nurse.)

For the moment, just know that I am embracing what I really want to do in the world – which, I’ll admit, is “women’s work”: the arduous, astonishing, and worthy work of a nurse-midwife.

This is not to say that I’m over all of my hang-ups. When my stethoscope arrived in the mail and was pink, I have to say that my first thought was, “Oh come on! I’m already going to be a nurse, and now my stethoscope is PINK?!” And when I first tried on my regulation white nursing shoes, regulation white socks, and “honey beige” compression stockings, I was not so much thinking, “What a noble profession I’m joining,” as, “I’m pretty sure that nursing school is where radical feminism goes to die.” 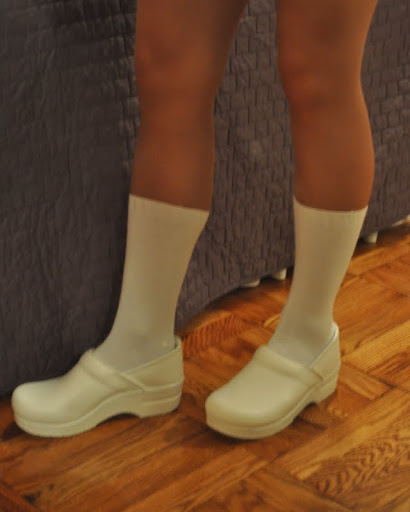 At least what goes over this is blue scrubs instead of a little white dress.

My point is that I’ve got plenty of internal mishegas to deal with, which I’m sure will only become more pronounced as I move forward in my education. And tomorrow is Day 1.

After so much wind-up, I’m a bit of a nervous wreck – so let’s just rip the bandaid off and get started.