I mostly share with you stories about journeys past, but here’s one about a journey yet to come: for a couple years now, RP and I have had a scheme for a massive walking journey, from Hangzhou to Beijing along China’s Grand Canal.

For those of you not in the know: the Grand Canal is one of history’s great works of human engineering. Some 2,500 years ago, southern sections of this canal began to be built to facilitate trade and create a military supply route; over the following 1,500 years further sections of the north-south canal were built, ignored, abandoned and rebuilt, based on the economic and military whims of subsequent dynasties’ emperors. It was not until the 13th century that the various pieces of the canal were all linked and repaired by the Mongols, those pesky invaders to whom present day China owes thanks for an entire tourist industry (see: The Great Wall).

In the nearly 1,000 years since that time, the Canal as a whole has gone through cycles of prominence and disuse, recently returning to the spotlight with the advent of the South-North Water Transfer Project which…well, don’t even get me started on the environmental, economic and social problems associated with this plan, the most massive water transfer project in the history of the world, involving as it does not just a transfer north from the Yangze River but also numerous other water sources including that of the Qinghai-Tibetan and Western Yunnan Plateaus.

In any event, the theoretical walk will follow the route below – we figure we’ll allow three months to do the whole thing, south to north. There are a number of reasons this journey hasn’t happened yet (and probably won’t happen for years now that we’re back in the US), not the least of which is that it’s actually pretty difficult to figure out where you’re supposed to walk. The map above makes it look so simple – We’ll just follow that blue line until we get to Beijing! – but, of course, it wouldn’t be. It’s not like it’s got a boardwalk or anything.

This route would take us through some of the most (fascinatingly, disgustingly) industrial and least lovely parts of China, and would involve navigating by foot through sprawling cities, factory towns, and numerous restricted areas of government and military activity, no doubt – and those are just the places where there is a visible Canal to follow. We have heard that, particularly in the north, the Canal has become so silted up that you can’t even tell it’s a waterway at all.

In the end, it might be a journey of the mind more than anything else, with knowledge of the historical and social importance of the route playing as important a role as the sites along the walk itself. Either way, all I can say about the Grand Canal for the moment is this: I walked along it for one day.

After arriving in Hangzhou from Taipei via Shanghai (bullet trains truly are the most astounding technological development), I dropped my belongings at a friendly hostel and set out to experience a soupçon of our future walk along the Canal.

I took a public bus to a modestly interior point on my Hangzhou city map where the Canal seemed to appear, with the goal of following it east to its outlet into the Qiantang River, which flows out into the East China Sea. After a healthy dose of head scratching and asking eight people for directions (did I ever tell you I have a terrible sense of direction? It’s awful. It’s amazing that I make it out of so many strange places alive), I made it to the Grand Canal. 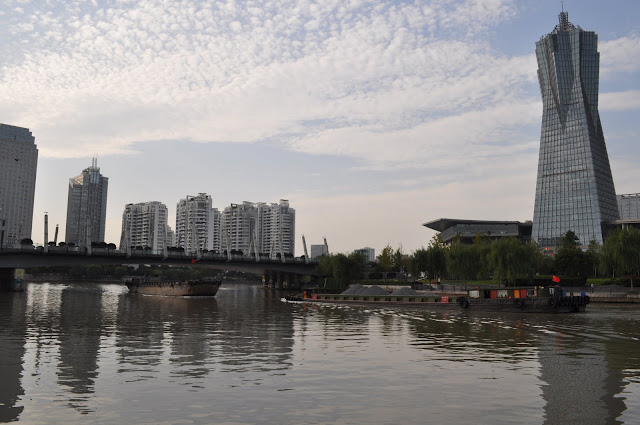 I figured that if any part of the Grand Canal were going to be charming, this would be it. And indeed, the city of Hangzhou has done a very nice job of curating little stretches of it in the downtown area, complete with continuous stone-paved pedestrian walkways from which to observe the amusing variety of crafts plying the waters of the Canal. 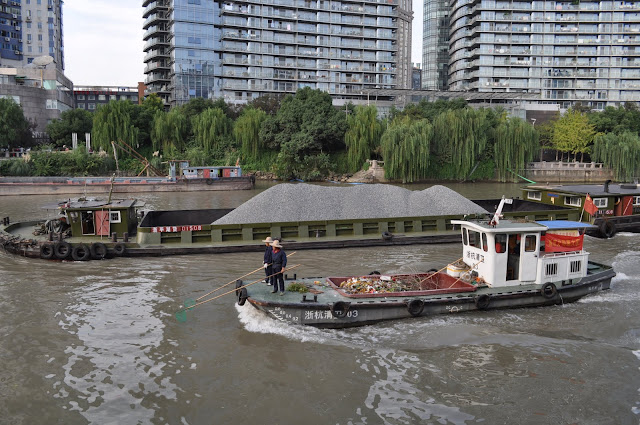 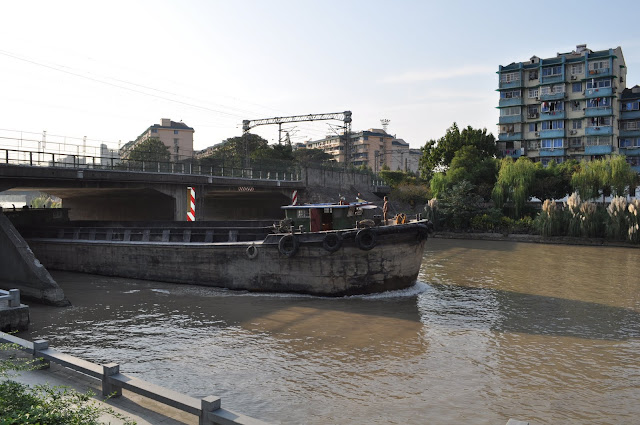 There are even places where you can rent city bikes along the Canal, all the better to impress your new girlfriend with your riding skills as she dangles precariously off the handle bars (or that seemed to be what people were using them for mainly, anyway). 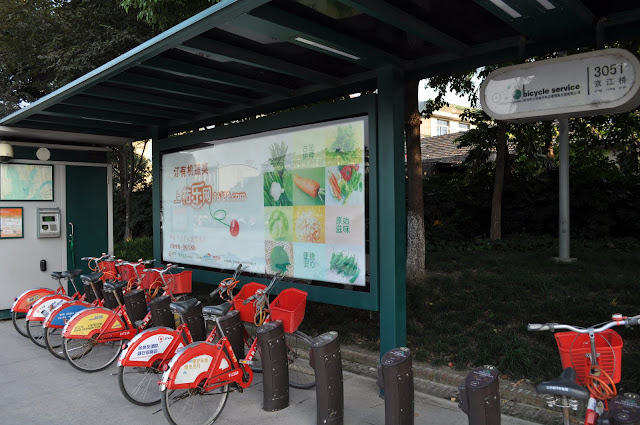 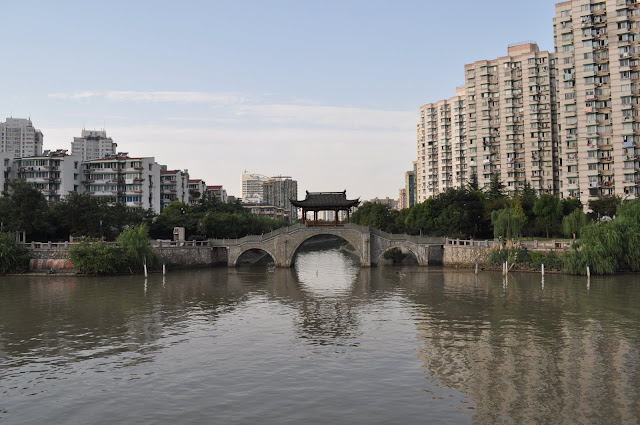 Just as I was beginning to wonder how long all of this pedestrian-focused nicety would last, I had my answer: 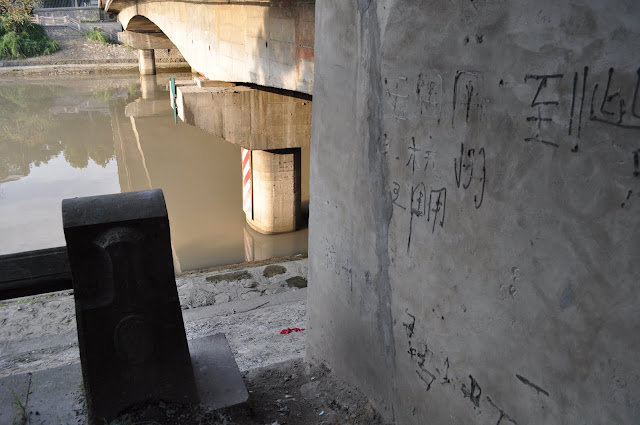 Time for a little urban off-piste. 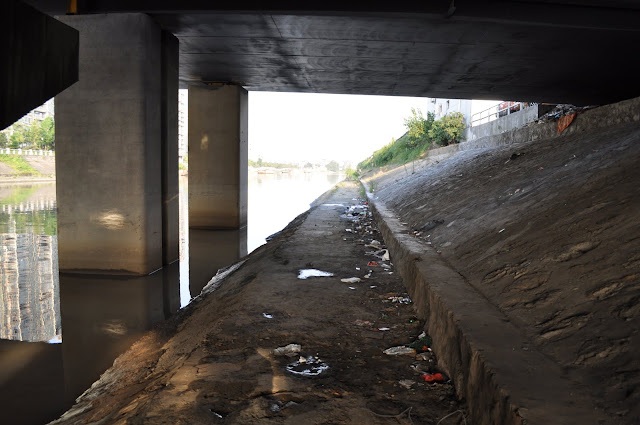 I followed the Canal along its non-pedestrian byways for a couple hours, past various people doing shady things including dumping hazardous waste; removing large, mangled fish from the water; and the inevitable small groups of dudes doing drugs. I’m a lot chiller around the open use of heavy drugs than I used to be, thanks to the work I did with IV drug users while living in Kunming. I gave them a quick smile, they gave me a look of utter mystification, and I carried on walking.

It was right around here that I noticed that the path ahead ran straight into the water, and that the pedestrian walkway picked back up on the other side of the Canal. (Why do I seem to be perpetually, in all such situations, on the wrong side of the water/highway/train tracks?) 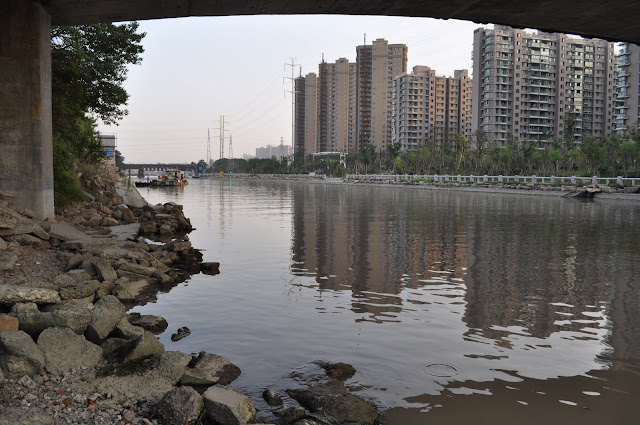 I gamely asked the gentlemen you can see in the distance, ferrying mysterious cargo, if they would transport me to the other side. They laughed for longer than was necessary.

After scrambling up the steep bank to an overpass (get your tetanus shots before coming to China, everybody), I realized just how late the day had gotten. 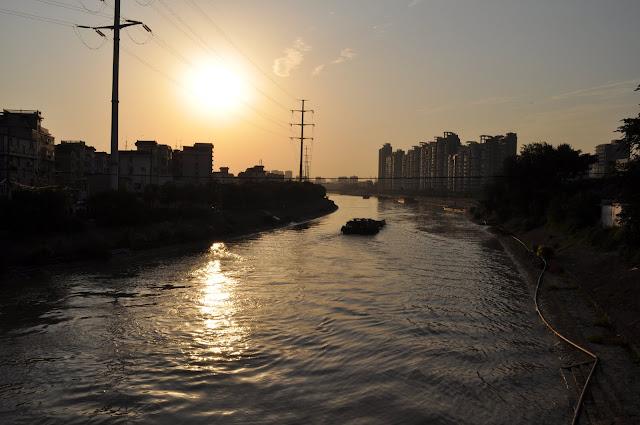 I was going to have to hurry in order to make it to the Qiantang by dark, and my map had ceased to be sufficiently detailed to be useful. Racing alongside six-lane roadways and towering new housing developments that block out all of the daylight, dust from the construction sites (i.e. the whole eastern part of the city) rose in clouds. I wrapped a thin scarf around my nose and mouth. 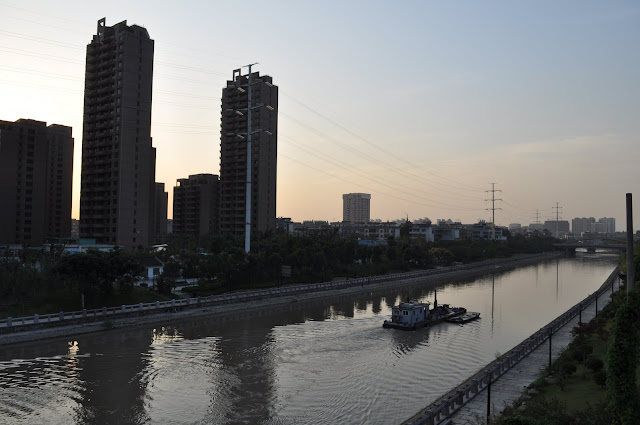 After a final haul past a disused stadium, a gargantuan and sandy open lot that will probably be 5,000 new housing units next month, and a sudden proliferation of seedy hole-in-the-wall internet cafes, I made it to the point where the Grand Canal meets the Qiantang River. 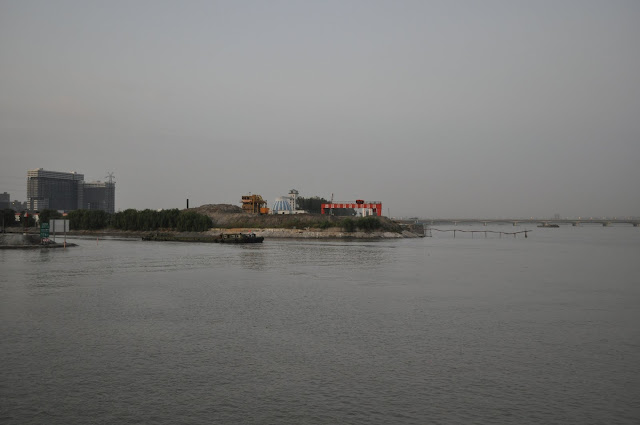 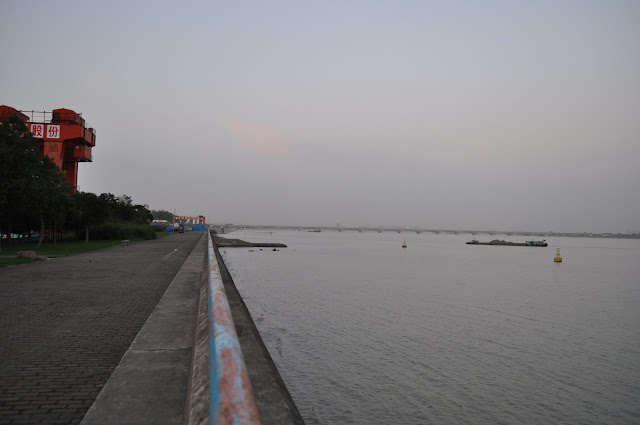 It’s…not spectacular, is it? It’s too polluted to be spectacular. Instead, it’s just ordinarily vast – vast in a way that is not done justice by these photos. 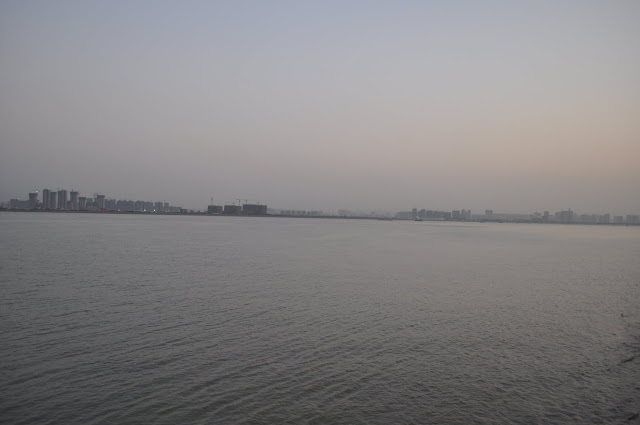 But urban travel in China is like that; it’s mafan – a pain in the neck. It’s noisy, polluted, and more exhausting than seems reasonable. All of the quietude necessary for appreciation has to come from some deep, protected corner of your mind. You must survey this spot where water comes together with other water, as Raymond Carver wrote, and you must think:

This is the beginning of a path leading over a thousand miles to the north. Emperors, generals, peasants, and mercenary schemers of every kind have used this channel over two and half millenia for trade, for travel, for war. How many fortunes have been made along this canal? And how many lives were lost in creating it?

3 thoughts on “Hangzhou and the Grand Canal”