I’m sitting in my stuffy hostel room in Taipei, taking stock of my current possessions. In total, here’s what I’ve got: 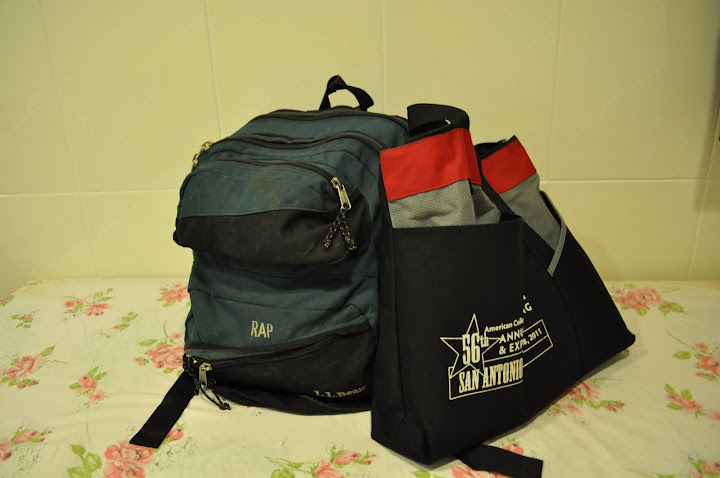 A week’s worth of clothes, a bag of toiletries, my neglected little journal. The many electronics that I’m hoping will survive my continuing travels in Asia: laptop, camera, Kindle. Souvenir currencies from a few countries. The contents of my bags reflects the vaguely uncertain nature of this period: khaki skirt and sandals for the tropics; long underwear and a woolen knit hat for the desert at night.

A few days ago, I was traveling with probably twice as much stuff – more than I needed, I guess. RP relieved me of much of it (a gentle shove in the direction of practicality) when he had to suddenly leave Taiwan to attend the funeral of his grandfather, a lovely man who will be much missed and whom I am so glad to have known, albeit only for the last few years of his life.

So now, unexpectedly, it’s just me, finishing off an abbreviated version of the trip RP and I had planned: around Taiwan, back to the Mainland for Hangzhou, Shaoxing, and Nanjing, and finally to Xinjiang, that massive region of China’s far northwest.

Longterm traveling with a friend is an intense experience – you spend every day together, making endless little choices, balancing each of your personalities and various priorities. When your fellow traveller is also your husband, the intensity is even greater; you can find that you haven’t spent more than five minutes apart in weeks. And when that fellow traveller suddenly disappears, you can feel pretty naked.

For these three and half weeks I’m on my own, and I’m trying not to feel ambivalent about it. On the one hand, these are places I’ve really wanted to travel – particularly Xinjiang. On the other hand, I had this vision of how the trip was going to be, and RP was a big part of the vision. Time to regroup.

I’m heading back to the Mainland tomorrow morning – I know, I’m leaving already and I haven’t even told you how the two weeks in Taiwan have been! I’ll describe the bulk of the trip in my next post, but for now, let me just tell you about today.

Today is a national holiday in Taiwan, in honor of the 100th anniversary of the founding of the country, officially the Republic of China. (This is not to be confused with the People’s Republic of China – that would be the hulking landmass inhabited by 1.4 billion people just across the Taiwan Strait claiming this island as a rogue province…I’ll get to that business in my next post.)

The Taiwanese people I have met are very much into their distinct identity as Taiwanese, and the official propaganda about the separateness of Taiwan from Mainland China is no joke: this is a place where the official calendar is pegged to the founding of the Republic of China. I’m not kidding; you may think it’s currently 2011, but in Taiwan it’s the year 100. In the US, I am regarded as having been born in 1983; in Taiwan, I was born in the year 72.

Now, that’s all fine with me. Want to start your calendar at the founding of your country, instead of at the supposed birthday of an ancient religious leader from Nazareth? Go right ahead. But I did figure that, in a place that essentially regards everything before its founding as pre-history, the 100th anniversary would be a big deal. I got up this morning, having watched the official flag raising and presidential speech on TV

(BlahblahblahSUNYATSENWASTHEMANblahblahblahRANDOMSTATSTICSABOUTWHYTAI
WANISAWESOMEblahblahblahTAIWANISOURHOMELAND…sorry, it’s hard for me to get riled up by Ma Ying-Jeou, one of the world’s consummate snivelly-mannered bureaucrats. It’s like watching Mr. Smithers give a high school commencement speech.)

and ventured out to take part in the revelry I was sure would be happening.

I walked a few blocks – all business as usual. I headed straight for the Presidential Palace, where just moments before I had seen tanks parading around on TV, having heard fighter jets roar over the city – but almost everyone had dispersed. I ended up at the Chiang Kai-Shek Memorial – alright, here were some minor crowds. But if I hadn’t already been to the Memorial and known that normally it’s pretty empty, I wouldn’t have noticed anything out of the ordinary.

Where were the block parties?! Where were the overpriced barbecue and bottled water hawkers?! Why was nobody’s face painted to look like the Taiwanese flag?!

I did happen to run into a cool mini-parade of these 10-foot tall Daoist temple guards, but that only lasted for 5 or 10 minutes. 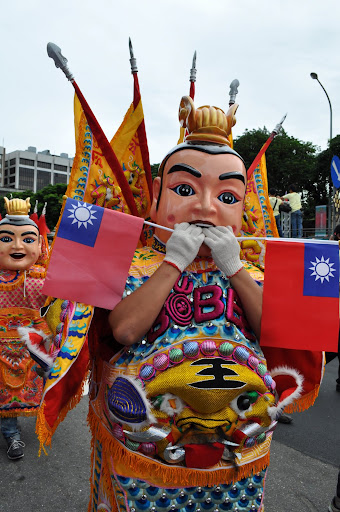 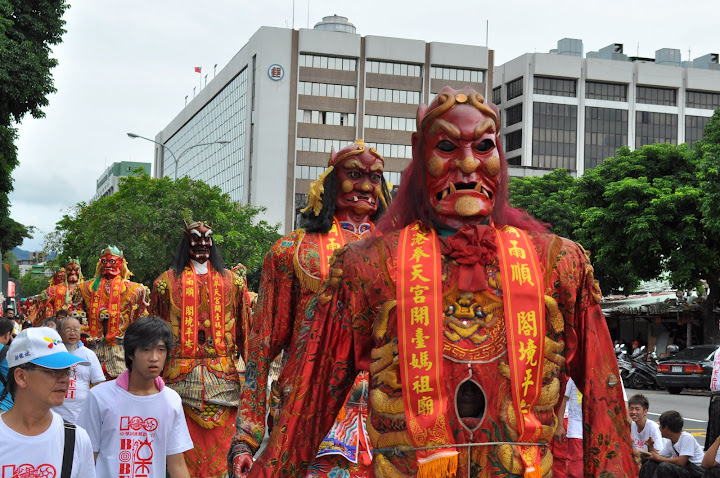 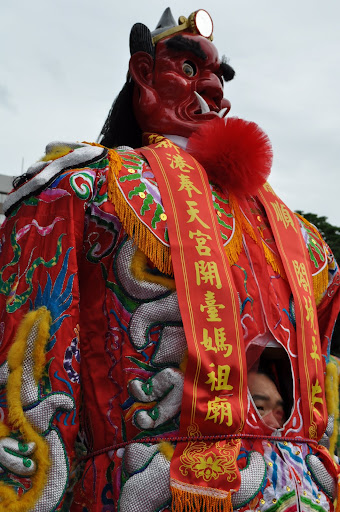 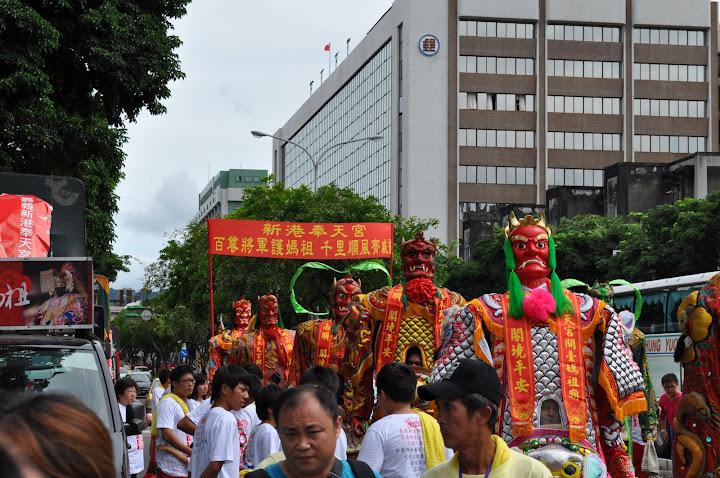 It took my friend NF, who I saw later in the day, to enlighten me: according to him, most Taiwanese people, proud as they are of being Taiwanese, don’t actually give a rat’s ass about the centennial anniversary. Turns out, NF reminds me, that 40 years of martial law makes some people less than totally enthusiastic about celebrating official anniversaries, and doesn’t particularly put them in the mood to eat festive barbecue.

Apparently, there was a giant, centenary fireworks display held in Taipei tonight, but I was faced with a choice of events: fireworks in 95% humidity, or a rare and spectacular (and FREE) performance of Mahler’s Symphony No. 8 (e.g. “Symphony of a Thousand”) by the Taiwanese National Symphony Orchestra and conducted by the great Lü Shao-Chia.

I went with the Mahler, and it was glorious. A bombastic epic, an entire world of musical plots and characters, a swirling mass of musical ether.

Recently, I’ve so been missing live musical experiences like this one that tonight, presented with such an onslaught of beautiful noise, I thought my chest might burst with glee. At the end of each of the two movements I felt as if I had been bodily launched into space. (NF, a person far less starved for such concerts than I, pointed out that the massive ensemble seemed a tad tired, having performed this beast last night as well, but I say HEY – I thought it was tremendous.) I know it’s a random thing to do on the last night of a trip to Taiwan, but you have to take these chances (FREE TICKETS) when they come along.

I hesitate to post the video below, because obviously it does no justice to the experience of hearing this piece live, but I feel like I have to post it for the benefit of those who haven’t heard Symphony No. 8 before.

Enjoy! I’m off to bed, and then to Shanghai.

10 thoughts on “And Then There Was One”