Barbara and I made it out of the Valley without incident, which is certainly not always a given. Last time we made our 5am exit (I kind of love doing that – stealing away under cover of darkness!) there was a giant mudslide following a night of torrential rain, and it looked like we wouldn’t be able to leave at all.

Before going to the Valley I had never encountered a mudslide and didn’t understand what the big deal was. So it’s some mud, right? Can’t you just…go over it? No, it’s not just “some mud” – it’s like a giant flood of rocky pea soup, up to your knees, or waist, or higher. You do not just “go over it”. Earlier this year, farther up the Valley, there was a mudslide that killed 30 people when it submerged an entire village – so don’t mess around with mudslides.

Life is full of little horrors like that in the Valley. It is a deeply beautiful place, and one in which life has become easier for the Azu over the past couple decades as they have become wealthier. On this past trip, all of the fields were ripe and bursting with greenery – mostly corn and rice, but there are also little orchards of peaches and apples,  and fields of tea bushes. 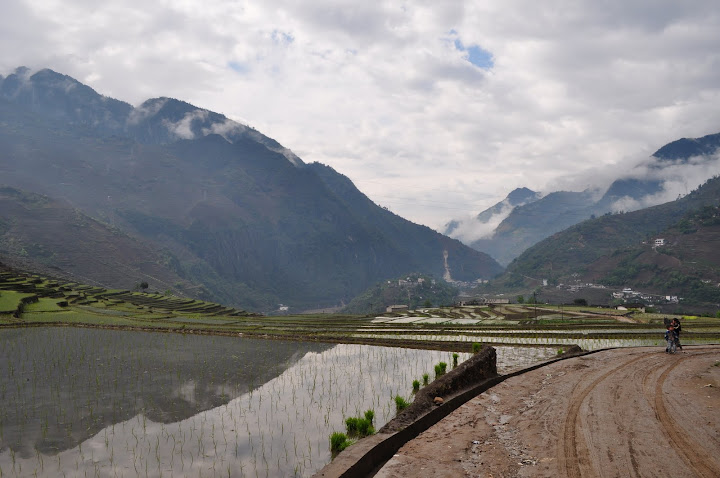 The Valley in April, when the rice was just starting to come up.

But the beauty and increasing fortune of Valley life belie the many dangers of living there.

The River that cuts through the Valley is a beast – broad and muddy, swirling with rapids and hidden boulders. Every year some number of people are carried off in it and drowned, including a little boy this summer who was pulled out into the River and died, after playing alone on its shores. He had been living with his grandparents, his father having run off and his mother away in another province working as a migrant laborer. Local authorities called his mother back to the Valley, telling her that her own mother was very ill. They feared that if they told her what had actually happened she wouldn’t even be able to withstand the journey, and they were probably right; upon hearing the news that her only child was dead she seemed to lose her mind, and was closely watched in case she should try to commit suicide.

Any little incident can turn into an emergency in a place like the Valley; even those who live on the Valley floor near the main road, and who are likely better off financially, are hours away from a hospital that could deal with any remotely serious issue. This is to say nothing of the poorer people who live many hours up into the mountains, which can only be accessed by footpath. A minor injury from a fall goes untreated and becomes a lifelong limp; a small cut from a tool or animal bite becomes infected and festers, turning deadly.

One day we were in the Valley, Barbara and I were riding down the main road in a little motorized vehicle when we saw a teenage girl we know pass us on her bike. We called out a greeting to her and she smiled, disappearing over a dip in the road. Sixty seconds later I spotted her again, this time lying unconscious by the side of the road. Her arms were bloodied and she couldn’t move – fortunately this was temporary and she was only in shock, probably having had a moderate concussion (wearing a helmet, thank god).

But what if she hadn’t been wearing a helmet? What if she had broken her back instead of cutting up her arms? The hospital in the Valley doesn’t know how to treat head injuries or perform involved, emergency surgery.

We managed to get her home and she is perfectly fine now – but you see how fortunes can change in an instant in the Valley.

I don’t know when I’ll next be able to go back with Barbara; the next few months are full of plans made or half-made, and then RP and I may be going back to the US. I’m trying to savor the experience of having been there as if it will never happen again. There is no classroom that offers the education that going to a place like the Valley can, but I’m excited to return to the classroom nonetheless; these experiences show you all of the gaps in your abilities, and teach you how insufficiently educated and unprepared you are to help people in situations of real hardship.

Here’s hoping that one of these nurse-midwifery programs will take me!

One thought on “Experience Overload Part 4: Danger in the Valley, and Making it Out”