Congratulations to you all on your excellent sleuthing!

Over the past couple of days you’ve sent pictures and written in about fake (or at least seriously questionable) Apple stores from Croatia to Colombia, Burma to Venezuela, Slovenia to Spain, and in a dozen locations right here in China. (I also appreciate the hilarity of the fake Hard Rock Cafe in Ho Chi Minh City and the fake Hooters in Cancun, but let’s stay focused here.)

The most elegant and accomplished ripoff documented was a fake Apple store in Xi’an, China, sent in by numerous readers. Here it is: 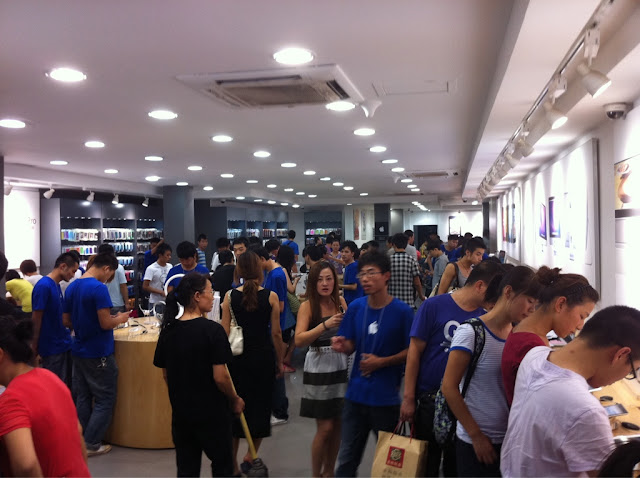 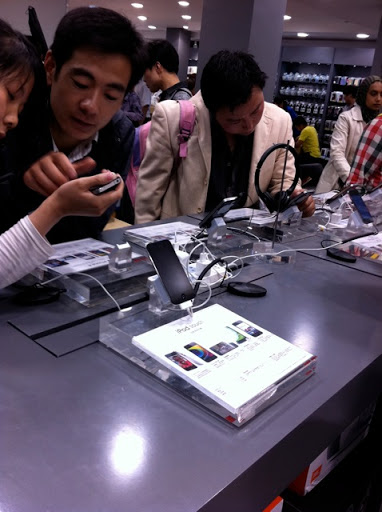 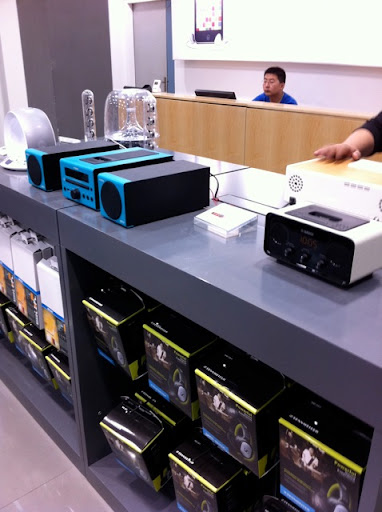 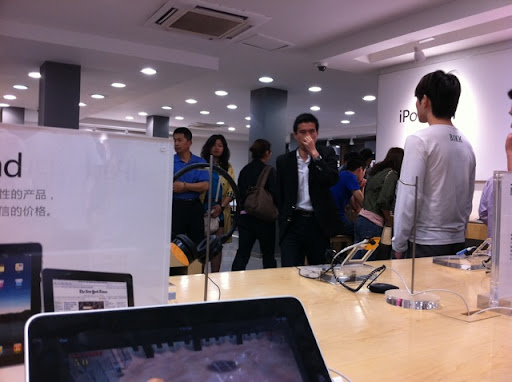 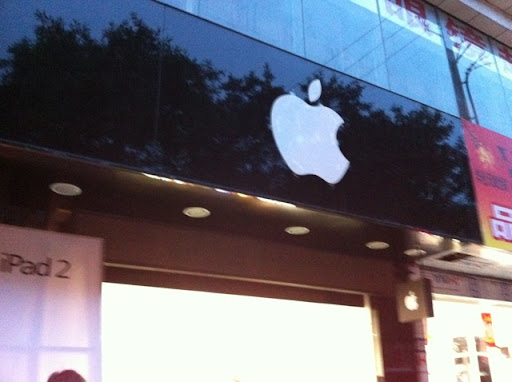 Honorable Mention goes to the following examples of shanzhai – obviously they’re not fooling anyone, but they won me over with their randomness and charm. 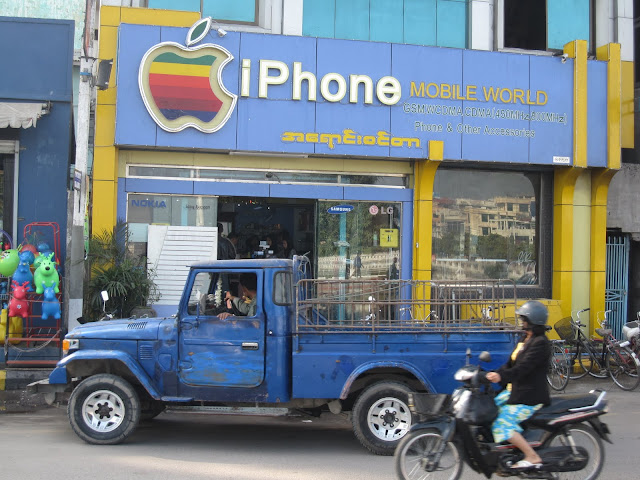 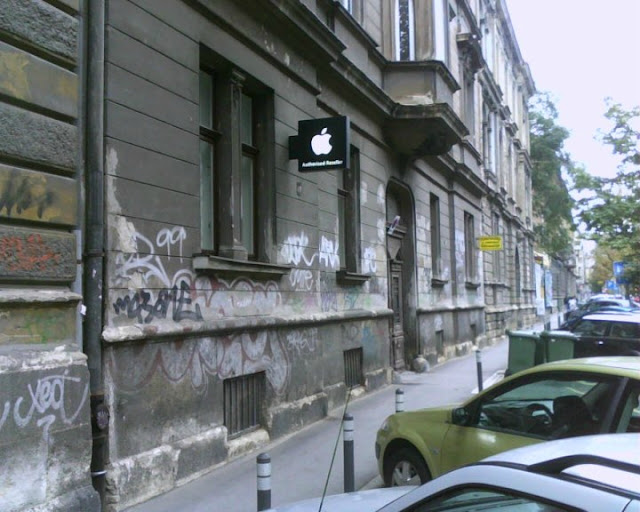 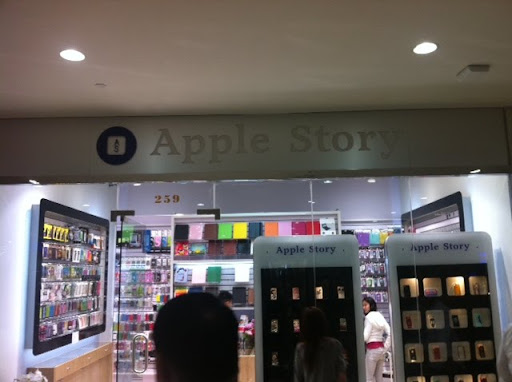 If anything totally outrageous happens on the “Apple Stoer” front (or if Steve Jobs ever emails me back), I’ll be sure to let you guys know. In the mean time, I’m probably going to get back to my regularly scheduled blogging, which, it may shock you to hear, does not generally deal with a certain Cupertino, CA-based electronics giant. Hope you’ll stay with me.

Thanks for coming along on this wild ride! It’s been a blast.

Video courtesy of Next Media Animation.

ETA: The reader who sent in the picture from Zagreb was under the impression that the Apple store depicted was a fake. Several readers have now written in saying that it is, in fact, an authorized reseller. I still like the photo, so perhaps the store in Zagreb will forgive me for keeping it up and consider it a bit of free advertising.

This just in from Chinese official news outlet Xinhua:

Industrial and commercial authorities in Kunming, capital city of southwestern Yunnan Province, on Friday started an inspection on all the city’s electronics stores.

The inspection is carried out after three stores, self-named “Apple Stores” yet never authorized by the Apple Inc., were exposed via the Internet.

The inspection includes business licenses, authorized permits of brand use, and the purchase channel of each store, said a worker with the city’s industrial and commercial department.

The inspection result will be announced to the public soon, the worker said.

The three alleged fake “Apple Stores” were discovered by a traveling blogger named BirdAbroad, who posted photos and challenged the stores’ legitimate status and rights to use Apple’s logo.

This kind of thing never happens!

As we head towards 1,000,000 views in less than 72 hours over here on BirdAbroad, I think it’s time to take stock and give an update on China’s favorite ripoff Apple store.

As many of you know, this story has struck a nerve in the Western world, and has spread virally…well, basically everywhere. Reuters is claiming that the story has been been picked up by nearly 1,000 media outlets – and I can tell you that I have personally been contacted by every major news source in the US and Europe, included the AP, AFP, CNN, BBC, ABC, NBC, and other similarly acronymed outfits.

The Chinese news media is also catching on, with several hundred stories have been published locally and around the country. This seems like a good moment to introduce you all to an excellent and relevant word in Chinese: shanzhai (pronounced SHAN-JAI). It means fake, ripoff, counterfeit. As in:

“Woah, these Adidas are on sale for five dollars!!”

“Dude, save your money. Totally shanzhai.”

An increasing number of Chinese people have contacted me, variously lamenting the enormous prevalence of shanzhai goods in China, but plenty of others have chastised me for even bothering to talk about this on the internet – shanzhai is unstoppable in China, they say, and point out that they don’t really care if the Apple store is shanzhai or not. Some have even said that Apple deserves to have shanzhai stores, since their products are absurdly expensive, despite being made right here in China.

I’ve also been called upon to publicly apologize to the city and people of Kunming for…I don’t even know what. Presumably for besmirching their good name.

The Toronto Star reported that they had reached the manager of the fake Apple store, who said that while the store is indeed unauthorized, the wares they sell are real. Reuters has reported that angry customers of the Kunming “Apple Store” have come knocking, demanding receipts for their previous purchases of Apple products.

An unnamed “senior U.S. trade official” has even weighed in, saying, “Confronting [the challenges we continue to face combating intellectual property theft in China] is a high priority for the Obama Administration.”

Regardless of the international furor, let me assure you that the store is still open and seems to be operating as normal. I have heard that international news crews will be descending on Kunming shortly, but until their footage surfaces let me offer you this bit of video, taken by me a few hours ago (Friday evening, China time).