So you won’t be hearing from me for almost two weeks, but hopefully when I get back I’m going to have some awesome stories and photos to share. See you in October!

So I’m late again – so sue me, I’ve had an exciting weekend. Anyway. The Love List:

Oh yes and in other news, why my weekend was so exciting: RP proposed. From a cable car sailing over Dianchi Lake (Yunnan’s largest lake) up to the top of Kunming’s Western Hills at over 8,000 feet. When we came back down in the cable car I managed to pull myself together enough to take a picture out the window – it looked like this (the windows were tinted slightly blue):

Rosh Hashanah comes to Kunming! Well, sort of – it’s not like I blew the shofar over the Panlong River or anything.

But last night I did take my friends out for dinner to a restaurant where they serve traditional Yunnan food and smuggled in a bottle of California red, a bag of apples, honey and bread (that, although it only comes in little rolls, tastes exactly like challah I swear). While we waited for our dishes to arrive I explained to them what Rosh Hashanah is meant to be about and we dipped the apples and bread in the honey and drank the wine and it was good.

P.S. New year, new haircut. Sorry the picture’s so weird – it was actually hard to take this photo for some reason. 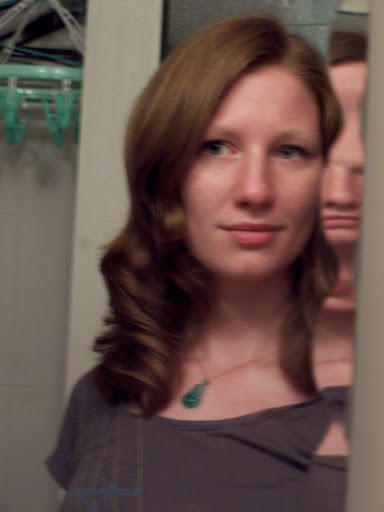 Whew. The Love List is getting a little tough these days. My days at work are long, I’m wading into territory where I’m having to pretend like I know what I’m doing but I sometimes don’t. I’m feeling kind of culturally isolated. I miss RP (although I don’t envy him; the bug infestations and hard-drinking residents of Dulongjiang don’t sound like a blast to me).

And today is September 11 — 8 years since the defining day of my generation thus far.

Today I love my family.

This will be a short one, because it’s been kind of a garbage-y week: RP left for Dulongjiang, work was kind of crappy and I had random bouts of insomnia. But the things that make it all better are:

That one goes out to you, little sister.

Have a great weekend, guys.

Welcome to September, everybody!

Depending on what part of the world you live in, this means a number of different things: if you live in Johannesburg, it means that Spring is finally here. If you live in Kunming, it means you’re gearing up for the nicest couple months of the year – sunshine, clear skies, mild temperatures. If you live in Singapore, I’ll grant you, it doesn’t mean very much at all – but that’s what you get for living on the equator, homies.

And if you happen to live in a very particular place called the Northeastern United States, you’re about to get something spectacular: Autumn.

I am a person of the transitional seasons – I get depressed and fidgety after only a few cold Winter days, and cranky and sunburned after only a few hot Summer days. (So I’m really a JOY to be around 6 months of the year.) I’ll take Autumn over Spring any day, and not just because my birthday is in October.

I have been thinking recently about my affinity for this most beautiful season, not only because Kunming won’t have it, but also because the feelings that come over me at this time of year are so very specific. I want:

I can’t stop these sentimental images from flashing through my head – yellow school buses, patterned sweaters, warm apple cider for god’s sake. The anticipation of Halloween and Thanksgiving – the great American holidays. All too soon, Autumn is swallowed by the absolutes of Winter, but it is glorious in its brevity.

You’d think I grew up in suburban New Hampshire for how strongly I crave these things, but I didn’t – I grew up in London where there is a kind of imitation of these seasons without actually getting it right. In London, Autumn means waking up every morning to a cement-colored sky – and it doesn’t clear up until April. By Halloween the sun has set at 4pm and you begin to question if the feeling of warmth on your face was just a fantasy of your own creation.

(Side note: I remember one Halloween in London when my older sister dressed up as a piece of coal. You’ll have to ask her to explain that one. But even though we went trick-or-treating in the late afternoon, we kept losing track of her because IT WAS SO DARK that her black-on-black costume just blended into the background. BOO!)

We did have Guy Fawke’s Day, a gruesome holiday celebrated with giant bonfires on which you burn the treasonous Guy in effigy, but by its celebration on November 5th it was generally so cold that you sort of wished someone would toss you on the bonfire as well.

My point is that even though these syrupy notions of halcyon Autumn days feel like a childhood memory, they are actually not something I really experienced as a child. Fortunately, London had something more powerful than the drizzle and gloom: AMERICAN. TV. SHOWS.

The impact of these shows that so classically depict the changing of the seasons in suburban America (Is it Spring? Let us picnic among the daffodils and butterflies. Is it Autumn? Let us carve pumpkins among the gently falling leaves) was apparently enough to blot out the memories of my actual life. For I am here to tell you that if you watch these programs regularly, you will begin to believe that Kevin Arnold is about to show up at your door to toss a football in the backyard and that AC Slater wants you to be his date to the Halloween dance.

Alright I think this is getting into a weird area, so I’m going to leave off here. But I’ll just say that I’m trying not to think about it too much, since it’s sort of getting me down. Last year for my birthday, RP took me on a great camping trip in the Berkshires. It looked like this:

This year I have a feeling it’s going to look more like this:

I know – boo hoo for me and my stunningly beautiful surroundings.

It’s just not the same, that’s all.